Health Factors to Consider Before Running an Ultramarathon 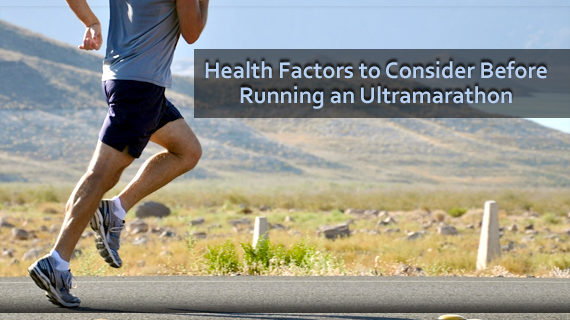 Health Factors to Consider Before Running an Ultramarathon

Before you decide to run an Ultramarathon, you need to know how it could affect your health. There are a range of health consequences related to this activity, ranging from cuts, bruises and blisters to full on hallucinations. Below are some of the key health issues to be aware of and take steps to prevent these when both training for and running an Ultramarathon.

Ultramarathons last considerably longer than a traditional marathon. There is a chance that your cornea could swell and this could lead to your vision becoming significantly blurred during the run.

Bites and stings from insects

Ultramarathons are an outdoor sports and bites and stings from insects can be common place, depending on weather and climate.

Normally ultramarathons are conducted on uneven terrains and this means that there is a heightened chance you could fall and hurt yourself. This is rarely serious and is more likely to take the form of cuts and bruises, as opposed to breaks or fractures.

It is rare to experience heart issues as a result of marathons and this is because when you run your circulatory system and heart are kept in good health.

However, a number of studies also indicate that runners who cover long distances have a higher risk of atrial fibrillation. At a basic level, this is a problem where your heartbeat becomes abnormal. Other research has also proved that you may have to contend with temporary cardiac dysfunction following such a long run. This is especially true for participants who have had the least amount of training prior to the run.

In 2014 a study was done among ultrarunners where it was found that many suffer from respiratory diseases. This may be attributed to the flora and dust that is common on the trails where such events are conducted.

As a long-distance runner, you should be aware of this, as it is a potentially deadly condition. Hyponatremia involves the sodium of your body becoming diluted by drinking an excessive amount of sports drinks or water. This way the cells can swell and burst, leading to your death.

This is a condition where your body temperature drops too low. This happens because in an ultramarathon it is natural for your energy stores to be depleted and the weather conditions tend to change. In fact, in marathons like these, heat illness is rather common as well. This is because of the intense effort required to complete an Ultramarathon.

People who run normal marathons burn more carbs and they need only gels and sports drinks in order to get by. Ultrarunners burn a higher amount of fat and this is why they need proper food. An Ultramarathon runner has to deal with more gastrointestinal issues. Apart from these they suffer from issues such as muscle cramps, stress fractures, and blisters.

Mr Kaser Nazir was my second opinion foot specialist after not being happy with the "verdict on my future before". I had a plantar plate injury. For a full time professional dancer teacher this was devastating. After meeting Mr Nazir I felt instantly reassured and I knew this is all going to be good. He END_OF_DOCUMENT_TOKEN_TO_BE_REPLACED

Mr. Gupte saw me at a couple of hours notice diagnosed the possible problem and started treatment that evening, he went on to try and sort out my knee but in the end he had to operate. This has been very successful and I am doing great. Thank you Mr Gupte. I am very happy END_OF_DOCUMENT_TOKEN_TO_BE_REPLACED

I cannot recommend Mr Nazir and his team enough. They're kind, supportive and with you every step of the way - from when you have the operation and during recovery. I had surgery on both of my feet which may sound daunting but it was honestly the best decision I ever made. Recovery has been END_OF_DOCUMENT_TOKEN_TO_BE_REPLACED