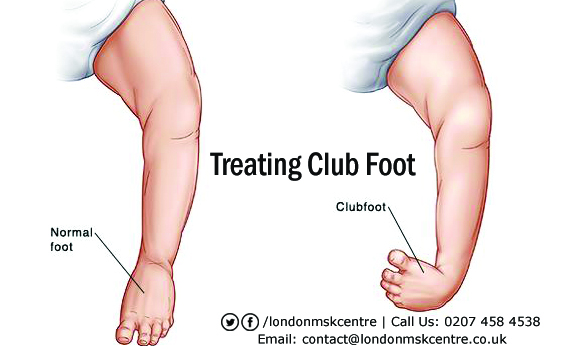 Club foot is a treatable condition that often affects newborns where the foot inverts inwards. An early diagnosis helps with treatment, so if your newborn is facing such a condition then you should see a medical opinion.

The bones, tendons, and joints of a newborn are rather supple. This is the major reason why the treatment of club foot starts within the first couple of weeks after the child is born, and ideally before your child learns how to walk. There are two major options of treatment:

This is the most common method of treating club foot. This involves placing the foot into the correct position and casting it in place. Following this the foot will be recast and repositioned once each week. This will normally go on for a number of months.

More on the Ponseti method

The Ponseti method may also require some minor surgery. Often, surgery aims to lengthen the Achilles tendon. This procedure is referred to as percutaneous Achilles tenotomy and would be performed when the process of stretching and casting comes to an end. When the shape of your baby’s foot has been aligned properly you will typically continue with strengthening and stretching exercises.

Special braces may be used over the long term to keep the foot in place. Later on, they are mostly used during the night, for a maximum of 3 years.

Surgery is needed when the foot is either not responding to non-surgical methods or is in a severe condition. An orthopaedic surgeon should be able to reposition and lengthen the ligaments and the tendons to better position the foot. After the surgery, your baby could be in a cast for as long as 2 months. After that, she or he would have to use a brace to ensure that the clubfoot never returns.

There is no guaranteed treatment for Club foot. However, if the condition is identified and treated early most issues, such as footwear or activity restrictions can be, can be solved in the long term.

Mr Kaser Nazir was my second opinion foot specialist after not being happy with the "verdict on my future before". I had a plantar plate injury. For a full time professional dancer teacher this was devastating. After meeting Mr Nazir I felt instantly reassured and I knew this is all going to be good. He END_OF_DOCUMENT_TOKEN_TO_BE_REPLACED

Mr. Gupte saw me at a couple of hours notice diagnosed the possible problem and started treatment that evening, he went on to try and sort out my knee but in the end he had to operate. This has been very successful and I am doing great. Thank you Mr Gupte. I am very happy END_OF_DOCUMENT_TOKEN_TO_BE_REPLACED

I cannot recommend Mr Nazir and his team enough. They're kind, supportive and with you every step of the way - from when you have the operation and during recovery. I had surgery on both of my feet which may sound daunting but it was honestly the best decision I ever made. Recovery has been END_OF_DOCUMENT_TOKEN_TO_BE_REPLACED