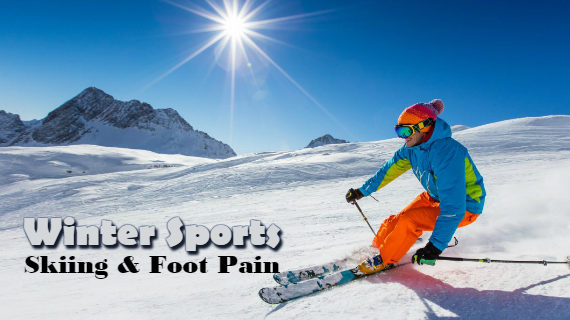 “The human foot is a masterpiece of engineering and a work of art”, Leonardo da Vinci

With winter having arrived I thought it appropriate to provide some helpful advice for this season.

The one thing that winter comes with in this part of the world is cold weather, which often brings ice and snow. These are both potentially dangerous as they change the friction levels of the ground we are used to interacting with. Reduced friction increases the likelihood of us slipping and falling where we can sustain impact injuries and fracture bones. However, more common are soft tissue injuries where ligaments and tendons are stretched beyond their normal range of motion and become damaged. Ligaments connect bones together and once torn or stretched, the relevant joint will usually have increased range of motion. A previous bony injury on the other hand could also limit range of motion.

The foot contains 26 bones, 33 joints and more than 100 muscles, tendons and ligaments. These make the foot a complex structure allowing the endurance of high amounts of stress from high impact activity. The foot therefore plays an important role in skiing.

Skiing is a complex sport which relies on pronation to control the inside edge of the ski. Most common complaints experienced by skiers are pain in the arches, which is often found in individuals whom have flat feet and more flexible foot types. This could however also be secondary to poor fitting boots or lack of support inside of the ski boot.

Importance of stability and the intrinsic muscles of the foot:

It has been reported that pain and lack of stability in skiers may also be due weakness or dysfunction in the muscles at the bottom of the foot, which are called intrinsic foot muscles. The intrinsic foot muscles are comprised of four layers that have both their origin and insertion within the foot. The most superficial layer has been reported to aid in stabilizing the arch. It has been suggested that loss of strength and dysfunction of these structures contributes to foot conditions, such as plantar fasciitis and flat feet.

As the intrinsic muscles start working harder to increase stability, this may eventually lead to overloading, overuse and increased stress with eventual pain and pathology. This falls into a field known as the Tissue Stress Theory.

Ideally the amount of stress and strain should be within a certain limit, referred to as the Elastic Limit, where tissue may undergo tolerable degrees of stress without failure or damage. However, when the amount of stress and strain increases above the elastic limit due to instability of the foot, this would shift soft tissues from the elastic region to the plastic region, which is essentially where the structure undergoes more stress than tolerable. This leads to microtrauma, overuse and pain.

Treatment for the skier’s foot pain is focused on three approaches:

See a professional podiatrist who can assess your range of motion and foot type. A good skiing position relies on correct boot fitting and sufficient biomechanical movements of the lower limb, particularly pronation and supination of the foot. You may benefit from a custom pair of skiing orthotics.

Please get in Contact to book an appointment with either Mr. Amir Saipoor or Mr. Steven Thomas

Mr Kaser Nazir was my second opinion foot specialist after not being happy with the "verdict on my future before". I had a plantar plate injury. For a full time professional dancer teacher this was devastating. After meeting Mr Nazir I felt instantly reassured and I knew this is all going to be good. He END_OF_DOCUMENT_TOKEN_TO_BE_REPLACED

Mr. Gupte saw me at a couple of hours notice diagnosed the possible problem and started treatment that evening, he went on to try and sort out my knee but in the end he had to operate. This has been very successful and I am doing great. Thank you Mr Gupte. I am very happy END_OF_DOCUMENT_TOKEN_TO_BE_REPLACED

I cannot recommend Mr Nazir and his team enough. They're kind, supportive and with you every step of the way - from when you have the operation and during recovery. I had surgery on both of my feet which may sound daunting but it was honestly the best decision I ever made. Recovery has been END_OF_DOCUMENT_TOKEN_TO_BE_REPLACED